U.S. Railroad Retirement Board
Management Member of the Board 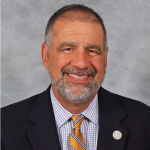 Thomas R. Jayne was appointed Management Member of the Board by President Trump in 2019 upon the recommendation of the Association of American Railroads and the American Short Line and Regional Railroad Association. His appointment was confirmed by the Senate on January 2, and he was sworn into office on February 4.

Prior to his appointment, Mr. Jayne was a Senior General Attorney for the BNSF Railway Company. In that position, he supervised tort litigation for the BNSF railway system, assisted with legislative and regulatory issues, and provided training and litigation advice.

Before joining BNSF, Mr. Jayne was an associate and partner in the St. Louis office of Thompson Coburn LLP, where he served as national counsel for clients in the transportation, manufacturing, banking, finance, insurance and construction industries.

A Missouri native, he received his B.A. degree in political science from Westminster College in Fulton, Missouri (1973) and his juris doctorate from the University of Missouri-Columbia School of Law (1976). He also clerked for U.S. District Judge H. Kenneth Wangelin in the Eastern District of Missouri.